No one can touch Egypt’s share of water: Al Sisi 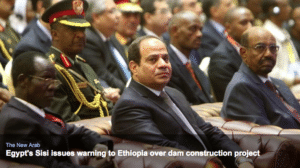 Egyptian President Abdel Fattah al-Sisi has warned Ethiopia over a mega hydroelectric dam it is building, which Egypt fears cut into the amount of water it is getting from the Nile.

The Abay, as it is called in Ethiopia, or the Blue Nile, once it left the country’s boundary, has long become a river that neighboring countries contest for their share of water.

Now that Ethiopia is building a mega hydroelectric dam, the river has become a bone of contention among riparian countries.

“We view positively the developmental needs of our friends and brothers in Ethiopia,” Al Sisi said speaking at the inauguration of a fish farm in the Nile Delta province of Kafr el-Sheikh. But he also said “We are capable of protecting our national security. Water to us is a question of national security. Full stop,” according to a report by The New Arab.

Egypt, Ethiopia and Sudan have failed to approve an independent study on the potential effects of the Grand Ethiopian Renaissance Dam.

Ethiopia is set to fill the dam’s reservoir while Egypt continues to air its concern that its lion’s share of water will be seriously affected and destroys the livelihood of farmers who depend on the river; while some of its officials have heightened their war rhetoric.