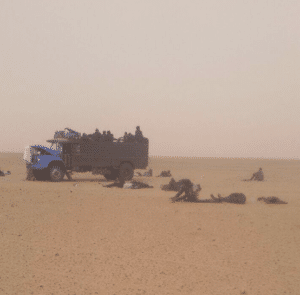 Hundreds of Ethiopian migrants in Libya who escaped political persecution back home have called for help from compatriots and the international community as they are in wretched conditions.

The over 200 Ethiopians are stranded in Libyan deserts and are at the mercy of smugglers and armed bandits, according to those who spoke to ESAT on the phone from Libya. They said several migrants have died from thirst, ailments as well as beatings by smugglers.

They said they were running away from political persecution back home by a ruthless regime that made their lives hellish in their own country.

The migrants came from Addis Ababa, Gondar and a number of places from the Oromo region where anti-government protests left hundreds dead at the hands of regime’s security forces.

Thousands of Ethiopians are fleeing home to escape political persecution as the regime targets political opponents and those who harbor anti-government sentiments.