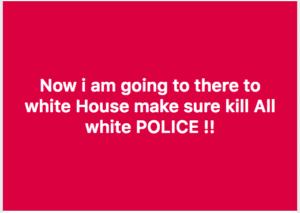 The Secret Service arrested an Ethiopian man on Monday near the White House after they had been told to be on the lookout for a man who allegedly threatened to kill “all white police” there, according to a CNN report.

Police in Montgomery County, Maryland, alerted the US Secret Service that the Ethiopian man planned to go to Washington with the purpose of killing officers at the White House, the report said.

Secret Service officers spotted Michael Arega of Dallas on Pennsylvania Avenue near Lafayette Park. He was officially charged with making felony threats, and was not armed with a weapons at the time of his arrest, CNN quoted a USSS statement as saying.

Michael Arega’s ex-wife alerted police from her home in Texas and she was concerned about her ex-husband’s mental and emotional health and that he had stopped taking his prescribed medications. She called police when she had discovered “troubling messages” on his Facebook page.

Michael posted on his Facebook post that he checked into a hotel in Silver Spring Maryland but was gone by the time officers arrived.

ESAT’s search for Facebook posts of Michael Arega show that he had been to downtown D.C. near the White House on Monday. One of his posts also made threats against police saying “now i am going to there to White House make sure kill all white POLICE!!”

“Our world should be free from this guy and we will be free in Jesus name.”

“Put him in jail Donald Trump in mighty name of Jesus Christ,” another post says.