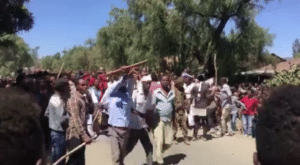 Residents of several towns in Ethiopia took to the street demanding an end to the TPLF rule.

Protests in East and West Hararghe continued for the third day. Six people were killed in Gursum yesterday by the Agazi forces of the regime as they shot live bullets into the crowd of protesters.

“Down, Down Woyane,” chanted protesters in Gursum, a district in Hararghe, Eastern Ethiopia.

Residents in Borena and Kulubi have also staged protest demonstrations against the regime.

Flyers issued in the capital Addis Ababa and in the southern city of Awassa call for the demise of the TPLF regime, according to ESAT sources.