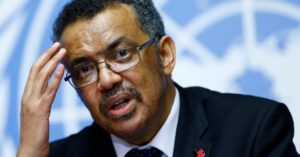 A watchdog agency called for investigation into the now rescinded appointment of Zimbabwe’s president Robert Mugabe as a WHO goodwill ambassador of Non Communicable Diseases (NCD) by its Director General, Dr. Tedros Adhanom Ghebreyesus.

A statement by the non-governmental human rights group UN Watch said it “welcomed WHO’S cancellation of its ‘absurd, immoral and insulting’ appointment of Robert Mugabe as goodwill ambassador but called for a full, independent and international inquiry into any possible deals made between the WHO chief—Ethiopia’s former foreign minister—and Zimbabwe’s ruler.”

“There must be more to the story,” said UN Watch executive director Hillel Neuer and asked “how could Dr. Tedros, chose to honor a man who has brutalized human rights activists, crushed democracy dissidents, and turned the breadbasket of Africa and its health system into a basket-case?”

“We regret that Dr. Tedros’ statement shows no remorse, nor any mention of Mugabe’s gross human rights abuses. On the contrary, he seems to double down and justify his decision by speaking of the need to ‘include everyone’, presumably tyrants as well.”

“We ask Dr. Tedros to agree to a meeting in Geneva of victims of Mugabe, which we will gladly organize, giving the WHO chief a chance to compensate for the damage he has done to the cause of human rights in Zimbabwe. He should now honor the victims, instead of the perpetrator,” said UN Watch, a non-governmental organization based in Geneva whose mandate is to monitor the performance of the United Nations.

“The tyrant of Zimbabwe is the last person who should have been legitimized by a U.N. position of any kind,” said Neuer. “Something is very ill at the U.N.’s world health agency.”

The announcement of the appointment of Mugabe as a goodwill ambassador drew a firestorm on twitter with some calling for the resignation of Dr. Tedros, while others who campaigned against Dr. Tedros’ recent appointment as the Director General said they were not surprised at all.

“Senior member of abusive #Ethiopia govt nominates pres of another repressive govt. Should we be so surprised?” said Felix Horne with the Human Rights Watch.

“Tedros is also a murderous despot. Both he and Mugabe have enriched themselves with no conscience while their people suffer,” tweeted NoDrTedros4WHO.

Yoseph Badwaza tweets “Isn’t it a bit hypocritical for a world that chose @DrTedros to head @WHO to act surprised when he appoints Mugabe as goodwill ambassador?”

“Tedros is a criminal, as all know in #Ethiopia. Tedros did not err appointing Mugabe: he was paying him back. Tedros is toxic for @WHO!” Ana Gomes, a Member of the European Parliament said in a tweet.

Canadian Prime Minister Justin Trudeau said he “thought it was a bad April Fool’s joke”, while the US state department said it “clearly contradicts the United Nations ideals of respect for human rights and human dignity”.

The UK government described his selection as “surprising and disappointing” but welcomed the decision to rescind the appointment.

Tedros said he had “listened carefully” to all those who expressed concerns and “heard the different issues that they have raised. I have also consulted with the government of Zimbabwe and we have concluded that this decision is in the best interests of the World Health Organization.”

“Thanx WHO. Don’t do it again. We’re watching” says a graffiti message on the fence of the WHO headquarter in Harare.