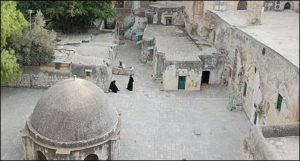 The St. Michael Church at the Ethiopian quarter of the Church of the Holy Sepulchre in Jerusalem has been closed by Israeli authorities after its roof had collapsed due to construction on the roof top monastery by the Greek Church.

There is a long-running dispute among Christian sects as to the ownership of the Deir al-Sultan monastery, on the roof of the Holy Sepulchre. The Ethiopian Orthodox and the Egyptian Coptic Churches both claim ownership of the site.

The monastery is badly in need of renovation but dispute between the Churches got in the way of Israeli government efforts to move forward with the reconstruction.

On September 22, 2017, the roof of the St. Michael church collapsed due to construction by the Greek Church on the Monastery on the top that has been going on for 6 years.

Chair of the Ethiopian Community in Israel, Tesfahun Eshetu, told ESAT that the collapse had damaged relics and paintings in the Church. He said no one was hurt as it happened after services were done and everyone had left the church.

The adjacent Medhane-Alem Church is also under threat of damage, according to Eshetu.

Ethiopian monks were said to occupy part of the Church of the Holy Sepulchre since 1808, a site believed to be where Jesus was crucified.

It is one of the most sacred places in Christianity, its ownership disputed by various denominations.