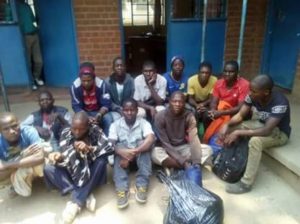 Malawi police said they have arrested 11 Ethiopian nationals for entering the country illegally.

Malawi24 reported quoting police that the 11 Ethiopians were arrested at Dzaleka Refugee Camp on Monday around 11 pm.

Police received a tip that the Ethiopians have been locked in one of the houses within Dzaleka refugee camp.

The Ethiopians revealed to the police that they had been locked in the house in Dzaleka refugee Camp since October 05, 2017.

The report said the 11 Ethiopians who are aged between 16 and 26, were being given food inside the house by a man they did not know.

The suspects also added that they were going to South Africa where they have relatives to look for greener pastures.

The 11 suspects have been remanded to Maula Prison pending further investigations so as to arrest the trafficker.