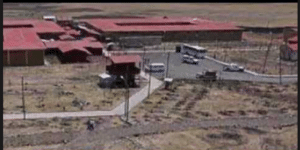 Co-defendants told a court in Addis Ababa that two inmates were beaten to death by prison officers at a maximum security prison outside the capital.

A defendant told the court that Alemaye Wake Mamo and Mohammed Chane were beaten to death by the superintendent of the notorious Qilinto prison, named Asefa Kidane.

Journalist Getachew Shiferaw wrote on his blog that Bisrat Amare, the defendant who exposed the killings to the court pleaded to the judges to transfer him to another prison saying he feared for his life.

Amare reminded the court that one of the deceased, Wake Mamo had previously demanded to the same court to be transferred to another prison as he feared for his life. Amare said now that he had exposed the crime, he feared he would face the same fate. But the court ignored his plea and sent him to Qilinto.

Alemayehu Gerba, a university student, died in a hospital after he was shot by prison officers.

Gadisa Hirpa, a political prisoner, was beaten to death at the Kaliti prison for smuggling in a cell phone.

Prison guards indiscriminately shot and killed over 20 inmates at Qilinto as they tried to escape from a fire that broke out at the prison in September 2016. The political prisoners that appeared today before the court were accused of starting the fire.