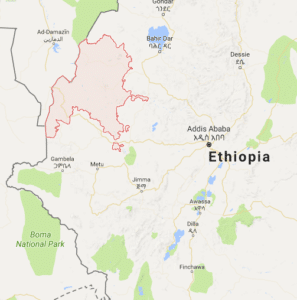 Reports reaching ESAT say nine people were killed in ethnic attacks allegedly instigated by operatives of the TPLF. Thousands of Amharas have also been displaced as a result of attacks by the locals.

ESAT sources say in Kamash Zone alone, nine people were killed in ethnically motivated attack which sparked the displacement of Amharas from the region.

The sources said the regional government has exacerbated the situation instead of helping to stop the carnage. They said representative of the Amhara National Democratic Movement (ANDM) that came to Benishangul Gumuz for a fact finding mission were involved in covering up the crimes.

Last week over 20 people were killed in Illubabor in the country’s Oromo region.

Observers and those interviewed by ESAT held the TPLF accountable for instigating ethnic clashes to extend its grip on power.