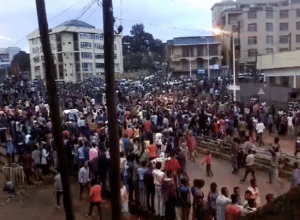 The Moyale-Addis road has been closed for the second day as anti-government protests continue in the Oromo region for the third day.

Reports reaching ESAT show protests continued today in West and East Wollega while a massive turn out was reported at the Bule Hora University in the south.

In Gimbi, Wollega thousands of protesters took to the streets demanding the end to tyrannical rule by the TPLF regime.

Holeta, Kombolcha in Hararghe, Jeldu, Nekempte, Borena, Yabello and Mega were some of the towns that saw massive protests.

additional federal forces have entered Shashemene, where eight people were killed on Wednesday.

On Thursday, security forces opened fire and killed six people in Borena, south Ethiopia, while 20 others were seriously injured.