Ethiopia: At least thirty killed in a week as ethnic clashes, protests continue 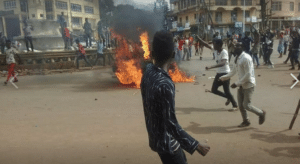 At least thirty people were killed in Ethiopia as ethnic clashes and anti-government protests have intensified in the country’s Oromo region.

The killings of three people in Nekemte over the weekend brought the number of people who were killed in ethnic clashes and at the hands of Agazi forces to at least thirty in a week.

Adisu Gadisa, head of communications with the city of Ambo, 74 miles west of the capital Addis Ababa told local media that Agazi forces have opened fire and killed at least 10 people while several others were wounded.

Injuries to those brought to the hospital, Gadisa said, were consistent with gunshot wounds and those who died were shot in the head and torso.

Three people were killed in violence in Nekemte. Latest information received by ESAT show explosion was heard in the town and a bajaj has been set ablaze.

Unrest has resumed in Ethiopia with protesters demanding the removal of the regime as some protesters resorted to ethnic attacks that claimed several lives.