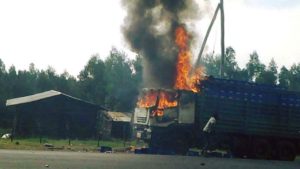 Students of Ambo University as well as students in Asela and Horogudru have joined the ongoing anti-government protests in the Oromo region of the country.

Students of Ambo, who were chanting “Down Down TPLF!” were joined by residents as they march on main boulevards in the town.

Ambo, Wollega, Horogudru, Muketuri, and Fiche were some of the towns where residents demand the removal of the TPLF regime.

The regime in response to the the unrelenting protests has reportedly deployed Agazi special forces.