Number of South Sudanese refugees in Ethiopia since September 2016 top 100,000 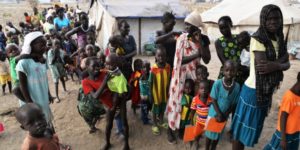 The United Nations High Commissioner for Refugees (UNHCR) and the International Organization for Migration (IOM) said on Thursday that the number of refugees who had fled renewed conflict in South Sudan since September 2016 topped 100,000.

The refugees from the world’s youngest nation are being assisted in Ethiopia.

According to a statement from IOM, since the eruption of the brutal conflict in South Sudan in December 2013, Ethiopia has received some 330,000 refugees, including more than 115,000 since the renewed violence in September 2016. Of these, some 30,000 arrived in July in Maiwut, Mathiang and Pagak in Upper Nile Region bordering Gambella.

“The sheer scale of the refugee influx which started in September 2016 quickly filled the existing camps in the Gambella Region to capacity and forced the Government and UNHCR to open a new camp at Nguenyyiel in October 2016,” said Clementine Nkweta-Salami, UNHCR Representative in Ethiopia.

According to a press statement, most of the new arrivals are women and children, including 20,510 children who have either been separated from their parents or travelled alone.

The IOM said the refugees were received in the different entry points by the government refugee agency (ARRA) and UNHCR and were accorded protection and humanitarian assistance before IOM relocated them to the camps.

IOM Ethiopia, which appealed for USD 4 million for the transportation of refugees from August until the end of the year, has so far received USD 1 million from the US State Department’s Bureau of Population, Refugees, and Migration (PRM).