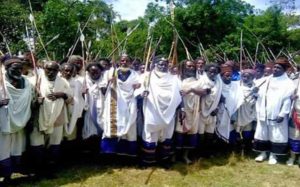 At least 46 people were killed in ethnic fights in Southern Ethiopia while over 50 were injured since clashes began in July.

ESAT learnt that the conflict has wiped out two localities in Southern Ethiopia with hundreds of houses set on fire and displacing thousands of locals.

The deadly clashes began when authorities tried to demarcate a border between the Oromo and South Ethiopian ethnic groups. Both sides have rejected the new demarcation, igniting a land dispute between the Burji and Kore on one side and the Guji on the other.

In Eastern Ethiopia, a two week violence between the Somali and Oromo ethnic groups on their common border feared to have claimed the lives of hundreds of people on both sides. The situation seems to calm down on Wednesday.

Close observers of the ethnic conflict blame the regime in Addis Ababa for fanning ethnic animosities. They say it was an indication of the failure of the ethnic centered federalism espoused by the TPLF regime.