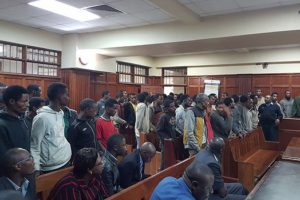 A court in Kenya ordered the repatriation of about 40 Ethiopians who were in the country illegally.

Kenyan media reported that the Ethiopians will be repatriated after completing a one month prison sentence or pay a fine of 800,000 Kenyan shillings.

Sixty-seven Ethiopians were brought to court today and pleaded guilty for violating the immigration rules in Kenya.

The Ethiopians have reportedly plead for mercy and lenience saying economic conditions and political persecutions back home have forced them to seek refuge in neighboring countries.

On Thursday, Kenyan police said they have arrested 60 Ethiopian immigrants from a residential estate in Nairobi. Thirteen others were also arrested in a house in Nairobi last week.

Ethiopian immigrants use Kenya as a transit country to South Africa and even Europe in search of better economic opportunities and flee political persecution.