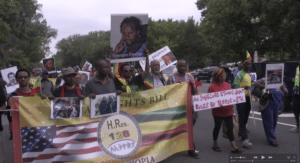 Ethiopians in the metropolitan Washington, DC area and elsewhere took to the streets today in support of H. RES. 128, a human rights bill by the U.S. congress on Ethiopia.

HR – 128 resolution, among others, calls for the Ethiopian regime to investigate the killings and excessive use of force against protesters in the Oromia and Amhara regions last year; and the release of dissidents, activists, and journalists who have been detained en-masse for exercising constitutionally guaranteed rights.

The demonstrators called on the U.S. Congress to pass the resolution which was sponsored by Rep. Christopher Smith and co-sponsored by 64 representatives from both sides of the isle.

The demonstrators demand the U.S. government to stop financing a regime that kills its own citizens for merely expressing political and economic rights.

They condemned the recent killing of civilians in the Oromo and Somali regions and also used the occasion to pay tribute to those who lost their lives at the hands of regime security forces and stampede at the Irrecha ceremony last year.

A similar demonstration was also held in Toronto, Canada.