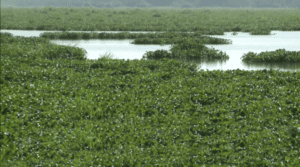 The spread of water hyacinth that has threatened the ecosystem of the country’s largest lake, Tana, is also spreading on the Abay River at an alarming rate.

Experts say the water hyacinth has covered 25 hectares on the Abay River and locals blame federal authorities for not responding to the threat posed by the pollutant on the country’s two largest water bodies. They say their call to authorities for action fell on deaf ears.

The weed – which has covered 50,000 hectares on Lake Tana – has now spread from the lake to the river and expert warn could eventually dry the water.

Experts also warn the spread of the water hyacinth could create significant damages to the fish and other aquatic life. Besides its negative effect in hampering transportation, irrigation and hydroelectric power, it also creates a breeding ground for mosquitoes.

The water hyacinth first appeared five years ago and believe to have been brought by expat engineers working on nearby dams, according to Wase Anteneh, a researcher with the University of Bahir Dar.

Lake Tana has surface area of about 3,500 square kilometers, and is the source of the Blue Nile. It is also home to a number of monasteries.