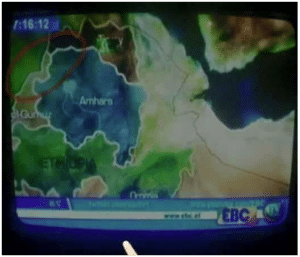 A map of the Tigray region, annexing areas in Amhara and Benishangul regions and bordering the Sudan, as shown on Ethiopian Television a.k.a. EBC

The Ethiopian regime is to transfer the administration of disputed areas to the Sudan for a period of ten years, according to sources with access to documents and maps of the disputed areas that locals claim were historically in Gondar.

The new development came after Ethiopia’s Prime Minister paid a visit to the Sudan last month in which border issues were top on the agenda.

The Tigrayan led regime in Addis Ababa has changed the map of Tigray to include areas bordering Gondar and Benishangul regions in what close followers of the political developments say was an attempt to create a “Greater Tigray,” which will border with the Sudan. Map of the Tigray region annexing areas from Gondar and Benishangul was shown on Ethiopian Television twice. The station issued an apology after a storm of indignation and condemnation by the general populace.

ESAT’s sources say Sudanese authorities, who are friendly with the TPLF oligarchs, have claimed vast areas in Gondar, including areas in Dolola, Soroka, Abraha Jira, Metema, Kwara, Tumet, Mendoka and Delango among others.

The areas that were reported to be transferred to Sudanese administration for ten years are what are referred to as Corridor 25 and Corridor 26, according to the sources, who say the move was an attempt to create access between the Tigray region and Sudan, annexing areas in Gondar and Benishangul to Tigray.

There have been several deadly clashes between farmers in Gondar and their Sudanese counterpart along the border areas ever since it emerged that TPLF authorities were working to give away land to the Sudan.