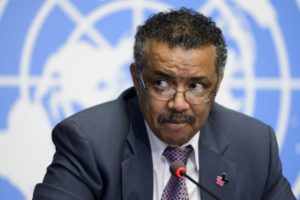 The newly minted director general of the World Health Organization and the former foreign minister of Ethiopia denies his country is one of the leading jailers of journalists.

In an interview with Foreign Affairs magazine, Tedros Adhanom Ghebreyesus , who was once a member of the inner circle of the TPLF, a regime that holds a dozen journalists in jail, defended the actions of the powers that be saying as far as he knows no person is in jail because he or she is a journalist.

Dr. Tedros dodged a direct question by the journalist who quoted his remark earlier in the interview that “media is crucial to the spread of public health information,” and who also cited a 2016 report by the Committee to Protect Journalists which says Ethiopia had 16 journalists in jail in 2016. “This interview is of me representing the WHO. So do you think it’s a good idea to talk about [something] country specific? It’s unrelated to the job I’m doing now.”

But in a follow up and a slightly indirect question as to what his response would be to people who say that his association with the Ethiopian government could undermine his work, Dr. Tedros spoke of the very topic he was avoiding. “It’s not related, but I can answer. First of all, when I was there, as far as I know, journalists were not jailed because they spoke their mind. It was because they trespassed. We have rules and laws, like any country. Journalists may or may not like a particular law, including in the U.S., but even if you don’t like a law, you don’t break it. That was the problem.”

His remarks came in direct contrast to a number of independent reports by the Committee to Protect Journalists, the Human Rights Watch, Amnesty International, Reporters Without Borders and other rights watchdogs that say the Ethiopian regime is one of the worst jailers of journalists.

Over a dozen journalists remain behind bars in Ethiopia over cooked up terrorism charges. The regime uses its anti-terror proclamation to detain its opponents and critical journalists.

Dr. Tedros also played down the spread of cholera epidemics in Ethiopia. Responding to a question why Ethiopia did not declared the epidemic as “cholera,” he said “it doesn’t even make any difference whether you call it ‘cholera,’ because the management is the same.”

Health experts say the diarrhea epidemic that claimed hundreds of lives in Ethiopia, especially in the Somali region, is cholera and should be declared as such.