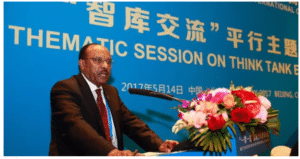 An Ethiopian director for the United Nations Development Program (UNDP) Africa Bureau in Addis Ababa was accused of nepotism for hiring a daughter of a friend who is a member of the Ethiopian oligarchy.

Tegegnework Gettu, regional director of the UNDP had hired Sallem Berhane in 2013 as an Individual Contract (IC) holder without ever participating in a competitive selection process, an investigative report by Inner City Press said.

Sallem Berhane is the daughter of Ambassador Berhane Gebrekirstos, a man who belongs to the inner circle of the TPLF clique running Ethiopia. The director of the UNDP, Mr. Gettu “has a very close relationship with the ambassador and gave instruction to his staff to secure her recruitment,” according to the report.

“In 2017, she was offered P3 Fixed Term contract without due process, as no vacancy was advertised and none of the organizational recruitment processes were observed,” the report alleges.

The newspaper, that focuses on the inner workings of the UN, called on the Secretary General to look into the matter.