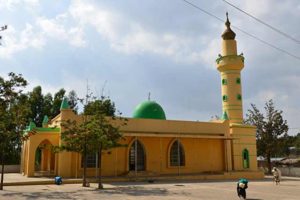 A Mosque in Wukro, Tigray

The Muslim community in Adwa town, Tigray region, say authorities have denied them access to Mosques and were prevented from carrying out other religious duties for supporting the Ethiopian Muslims’ movement for religious freedom.

Representatives of the Muslim community in Adwa who spoke to ESAT on condition of anonymity say they were also fined monetarily by the courts for supporting the ongoing peaceful campaign by Ethiopian Muslims to free their religion from intervention by a regime that rules with an the iron fist.

They say it was particularly painful to be denied of prayers and other religious duties in the holy month of ramadan. They called on Ethiopians and the international community to stand with them in their effort to assert their religious rights.

The Muslims in Adwa say they have committed no crimes except purely exercising their religious duties but authorities have been trying for the last five years to impose the Habash teachings of Islam, accusing them of being followers of the Wahhabi teachings of the belief.

Ethiopian Muslims have been peacefully protesting the intervention by the regime in their religious decisions and installing its cadres as leaders of the Majlis. In response, the regime violently crackdown on the movement and imprisoned the leaders. Some were released last year while others still languish in jail.