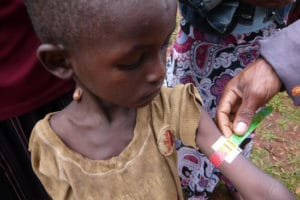 The United Nations warns that malnutrition looms in drought affected communities as food pipeline is breaking.

About 8 million people currently receiving food assistance face malnutrition as Ethiopia runs out of emergency food aid from July 2017, according Relief web, the information wing of the UN Office for the Coordination of Humanitarian Affairs

Malnutrition rates are currently high following poor performing spring rains particularly in the southeastern parts of the country. The situation is expected to worsen at the end of June when the 7.9 million beneficiaries supported by Ethiopia’s Productive Safety Net Programme receive their last transfer for the year.

The UN report said the National Disaster Risk Management Commission (NDRMC) and the Humanitarian Country Team (HCT) have officially expressed their concerns to donors about the gap in food and nutritional needs.

US$55 million is urgently required to ensure continuous treatment of severe and moderate malnutrition and, $500 million to purchase and transport food to an estimated 8 million people, for the second half of the year, according to the report.