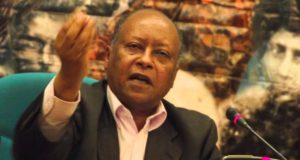 A senior official with the ruling EPRDF says the undemocratic culture entrenched in the legislature and executive branches is threatening the survival of the party and that of the government.

According to an audio of a meeting obtained by ESAT, Abay Tsehaye, one of the founders of the minority TPLF  ruling party and an advisor to the Prime Minister, said the deep rooted undemocratic and inefficient ways of doing business in the executive and the legislature is so rampant, the country could one day “go up in flames.”

“The executive of the EPRDF and the government cabinet need to change their undemocratic stances if we want to save the country from plunging into crises,” he said reminding the meeting that the status quo has resulted in the kind of uprising in the Amhara and Oromo regions last summer.

The official said anarchy has reigned supreme among the executives that   do not accept any criticism for improvement.

Abay Tshaye mentioned instances where incompetent officials are reassigned to government posts. “ The legislature should not always directly endorse budget and appointments coming from the executives. It should challenge it,” the official said referring to the rubber-stamp parliament.

Critics of the government say the speech by the official was an empty rhetoric as it comes from an official at the helm of a corrupt oligarchy.