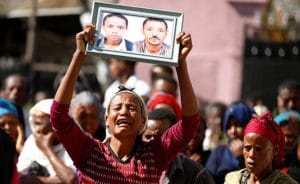 Mayor of Addis Ababa, Diriba Kuma told reporters that 75 of the victims were women.

Residents near the landfill who spoke to reporters however say the number is much higher than official estimates.

Some residents say they had to pay for operators of the excavators to search for their loved ones.

4,000,000 tons garbage is dumped everyday on the landfill, locally called Koshe, that is 36 hectares wide and 40 meters deep.

Koshe, Amharic for garbage, has been the city’s dumping ground for over 50 years. An estimated 500 waste pickers call Koshe home, scavenging for food and salvaging items for sale. The majority of the victims live in makeshift shelters.