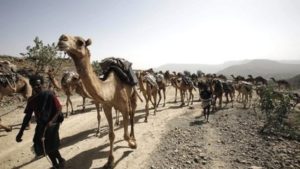 Security forces killed two in Afar after the locals confronted the forces in an attempt to free one of their own, who was beaten and abducted by the forces.

Ga’as Ahmed, Head of the Afar Human Rights Organization, told ESAT that the incident has happened in Awash Arba, in a place locally known as Halay Degi. He said the regime has settled about 6,000 former fighters of the TPLF and set up military camps, which he said has created resentment on the part of the Afaris.

Ga’as said the attacks and the killings of the two Afaris resulted in heightened tension in the area. According  information he received from his sources on the ground, the Afaris, who are traditionally armed,  have determined to defend themselves from the aggression by regime forces.

Ga’as said the settlers have taken over land from the indigenous people and that they have shown their objections to the move by the government that disregards their concerns.

In Megale, tensions remained high after the Afaris killed Desta Gemera in Tigray, whom the Afaris accused of killing several of their people.

The drought in Afar, coupled with recent clashes and repression by the regime, have worsened the suffering of the Afaris, according to Ga’as.