Outrage against the selection of Dr. Tedros Adhanom as a finalist for the post of WHO director general 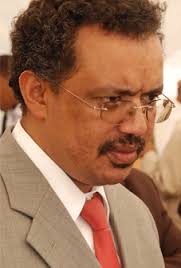 The selection of Dr. Tedros Adhanom as one of the three finalists for the post of WHO director general drew outrage among Ethiopians and friends of Ethiopia, who held Adhanom, one of a leading members of TPLF, accountable to human rights abuses and corruption ravaging the east African country.

The executive board of the World Health Organization on Wednesday selected Dr. Tedros Adhanom Ghebreyesus, Dr. David Nabarro of the UK and Sania Nishtar of Pakistan as the three finalists vying for the post of director general.

Dr. Karl Eldar Evang, grandson of Dr. Karl Evang, who co-founded the WHO wrote on Wednesday that “Dr. Tedros has responsibility over many years for severe human Rights violations in Ethiopia. It would ruin the legitimacy of WHO, to get him as a leader of the organization. The health of the World need a leader who is trustworthy. This is not that person.”

“Killer, killer,” reads another post from Gessesse Gizaw, with a montage picture of Dr. Tedros and gruesome photos of those killed by security forces of the TPLF regime, to which the WHO hopeful was an executive member.

Last year twenty Ethiopian civic and political organizations in a letter to the Chairman of the Executive Board of the World Health Organization (WHO) called for the rejection of Dr. Tedros Adhanom’s candidacy for the position of the Director General.

“Dr. Adhanom is a member of the inner circle of a ruling party whose leadership style is antithetical to democracy and respect for the rule of law. Lack of free elections in more than two decades, a fact that has been documented by numerous organizations and governments, serves as prima facie evidence of a repressive regime,” a statement from the group reads.

He is also accused of misappropriating funds meant for AIDS, TB and malaria research in Ethiopia.

The Office of Inspector General (OIG), a body commissioned to audit and investigate Countries receiving Funds from the Global Fund to Fight AIDS, TB and Malaria (GFATM), conducted an audit of Ethiopia and found “misappropriation of funds and use of donor funds for unsound and politically motivated programs.”

“Dr. Adhanom’s record as a member of the ruling party in Ethiopia and specifically his record as Minister of Health does not meet the exceedingly high standards required for a Director General of the WHO,” noted the letter by the twenty Ethiopian civic and political organizations.

“It is inconceivable that failure at improving the health outcomes of one country and mismanagement of funds obtained from an organization such as the GFATM should result in one’s candidature for the leading health organization of the world,” the letter said.

The decision by the executive board of the WHO to select Dr. Tedros as a finalist in the face documented records of human rights abuses by a regime to which Dr.Tedros is a part as well as campaigns by Ethiopians against the candidate, has put the credibility of the Organization into question, according to close observers of the development.

Member countries will pick the next boss of the global health institution in May.