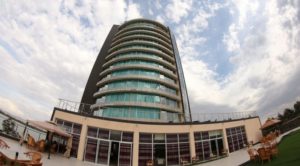 No party claimed responsibility for the explosion that happened at 8:00 p.m. local time. No casualties have been reported so far.

There has been a campaign against the staging of a musical concert at the Hotel by the locals who said the city is still mourning the death of hundreds residents shot and killed by security forces during anti-government protests this summer.

Witnesses also said there were government officials at the Hotel at the time of the explosion.

The owner of the Grand  Hotel, Tiliksew Gedamu, is believed to have close ties to ruling party officials.