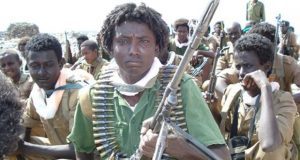 The Afar Revolutionary Democratic Unity Front (ARDUF) says uprisings and resistance will continue until the regime is eliminated and a genuine democratic federalism is established in Ethiopia.

ARDUF said in a press release on Wednesday that the state of emergency declared in October was aimed at legalizing the extrajudicial killings and other human rights violations.

“ARDUF believes that the imposition of the State of Emergency by TPLF/EPRDF is to deploy military forces to legalise its unlawful killings, arbitrary detention, imprisonment and to labelling opposition leaders as anti-peace and terrorist elements,” ARDUF said in a release.

The release aid the people of Afar have totally lost faith in the ruling clique in afar appointed by the TPLF. “The ruling clique appointed by the TPLF have failed to meet their legal, moral, ethical and political responsibilities and obligations to address the needs of the Afars. They are engaged in promoting tribalism and divide and rule policies. Tribalism is now overriding the national law.”

The people of Afar are “angry and they have almost totally lost faith, trust and confidence in the ruling clique.”

ARDUF demanded the immediate resignation of the TPLF clique to minimize the suffering of the people and give Afaris the freedom to decide their destiny.

The release further stated that popular protest will continue despite the regime’s desperate use of massive and brutal force instead of addressing the root cause of the problem. Such measures have not worked in the past and will not succeed at present as the uprising is re-bouncing back stronger than ever, ARDF noted.

“Neither the State of Emergency accompanied by the deadly crackdown on protesters nor the gross violations of human rights or the slanderous campaign to discredit the opposition will stop the democratic aspirations of the Ethiopian people,” the release underline.