Official says over 23 thousand arrested under state of emergency 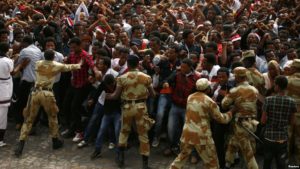 Over 23 thousand people have been detained since the declaration of the state of emergency in October following a yearlong anti-government protest in Ethiopia that saw the death of over 700 people in the hands of security forces.

Head of the command post in charge of the state of emergency, minister of defense Siraj Fegesa told local media that 18 of the detainees were members of the government’s security force.

Government officials meanwhile said over the weekend that about 9,000 people would be released on Wednesday.

The detainees were not told reasons of their arrest and formal charges have not been brought against them.

All prisons in Ethiopia are over capacity and the regime is using military camps and government buildings as concentration camps.