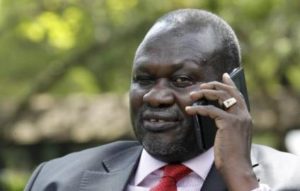 The Sudan People’s Liberation Movement and army in opposition (SPLM/A-IO) said in a statement on Monday that it condemns the United States for what it called “malice and pretence in targeting the victim Dr. Riek and the SPLM/A-IO while condoning the war crimes, crimes against humanity and genocide committed by Juba regime.”

The SPLM, through its Mission and Chapters in the Republic of Uganda, also condemned the current US proposal for the United Nation Security Council (UNSC) seeking travel ban and freezing of assets against Dr. Riek Machar.

The statement accused that the “real mastermind of all political mess in the country is Salva Kiir, the president of South Sudan.

“It’s indeed obvious and clear that the US Obama government is gambling with a ‘conflict of interest’ in South Sudan,” the statement said.

“We therefore, strongly condemn the Obama’s Administration for its since 15th December 2013 to date.”

The statement called upon the UNSC members to reject the US proposal as it is a “callous move that undermines the will and the wishes of the majority within and outside South Sudan.”

“Restricting and sanctioning Dr. Machar with words and actions while favouring an illegitimate government in Juba led by an imposed leadership of Salva Kiir and non SPLM/A-IO members Taban Deng Gai will definitely promote violence and prolong the sufferings of the people of South Sudanese.”

The statement also accused that the peace process spearheaded by the US was meant to “eliminate” Machar. “We discovered that the whole process was meant to lure the opposition officials and on top of them Dr. Riek Machar Teny, to come to Juba to be eliminated and indeed on 8th July 2016, the plan was executed on the watch of all peace guarantors and the international community.”

“The onslaught led to the death of many SPLM/A-IO members and subsequent slaughter of civilians’ base on their ethnicity by Juba regime. Dr. Riek Machar who is a victim survived and only trekked for more than a month to Congo.”

SPLM In Opposition said any peace process that sideline machar would backfire and that restricting his participation in political process will throw South sudan into violence and a fragmented South Sudan.