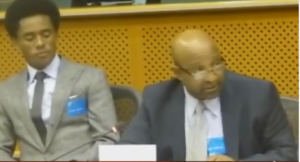 Feyissa Lelisa and Prof. Berhanu Nega (left to right) at the EU Parliament

Prof. Berhanu Nega, who on the occasion said Ethiopia is at the crossroads, cautioned that there were only two options: resolve the crises in a peaceful manner or engage in full scale war with the regime.

Nega, who described the situation in Ethiopia as deeply troubling even to foreign observers, warned that unless a solution is sought immediately, the cises in the country could reach a point of no return.

He said the uprising in the Oromo and Amhara regions as well as the Ogaden, which he said was a war zone, is leading the country into a deep crises.

“What Ethiopians demand is the same peace, security and democracy that is being enjoyed by the people of Europe,” Nega said and added it was ironical that countries who are watchdogs of democracy were also allies of the tyrannical regime in Ethiopia in the name of geo politics and fighting terrorism. “Tyranny is the source of terrorism,” Nega said.

Merara Gudina on his part called for the rubber stamp parliament in Addis Ababa to be dissolved and for the establishment of a transitional government.

Feyisa Lelisa, who said the suffering of Ethiopians under a brutal regime still continues called on the European countries to stop financing tyranny in Ethiopia.

Up to 1500 people were killed and close to 60,000 detained in the last one year of protests, according to Merara. About 600 were also killed in one day in October as millions gathered for a religious ceremony. Security forces shot at party goers creating a massive stampede. Some of the protesters died from gunshot wounds.