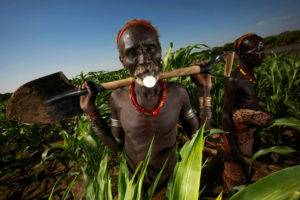 The indigenous people of south Omo, who have been the target of land grab by the TPLF’s minority regime in Ethiopia are fighting back the cruel forces of the regime and standing up against the state of emergency declared by the regime, which uses the martial law to further its grip on power.

A reliable source who spoke on the phone to ESAT said a policeman was killed and four others injured at a sugar plantation project, which was developed after displacing the locals from their ancestral land.

The source also said the people of Hamer have taken control of the main road leading to the plantation forcing security forces and authorities to use another route.

The residents have also attacked a local prison, freeing prisoners and seizing weapons. The people of south Omo have also refused to pay taxes and the exorbitant interest on fertilizers loan that the regime levied on farmers.

According to the source, south Omo was under a military rule even before the declaration of the state of emergency in October.

A vast fertile land in the Omo valley has been sold to cronies of the regime and foreign businesses uprooting the locals, who have no other means to survive.