Ethiopia: Newly crowned spokesperson deny any journalist is in jail 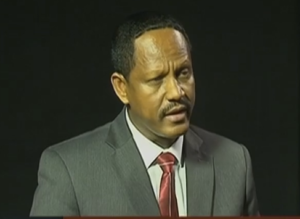 Ethiopia’s communication minister and government spokesperson denied the regime had jailed any journalist in the country.

In an interview with the state owned television, EBC, considered by Ethiopians as a lie factory, Negeri Lencho said no journalist is in jail in Ethiopia.

The minister’s denial came only a week after Elias Gebru, Anania Sory and Abdi Gada, journalists critical of the regime were detained by security forces.

His comments also came  two weeks after bloggers were thrown in jail and an editor of a newspaper was sentenced to one year in jail. His denial came as prominent journalists to the likes of Eskinder Nega, Temesgen Desalegn, Wubshet Taye and at least a dozen others were languishing for several years in the regime’s dungeons.

A member of bloggers of the popular Zone 9 collective Befeqadu Hailu was abducted from his home two weeks ago while a court in the capital Addis Ababa on November 15 sentenced Getachew Worku, the editor of the independent weekly newspaper Ethio-Mihidar, to one year in prison.

The minister went on to put the blame on Ethiopian journalists saying they have  wrong perception of fear of the government.  “They perceive there is a shadow of fear. They think that if they criticize the government, they will go to jail. They have to change the view of their environment,” the spokesperson said.

Regarding the damning reports by rights groups such as the Committee to Protect Journalists (CPJ) and Human Rights Watch on the regime’s handling of human rights and other freedoms, Negeri Lencho put the blame back to the rights organizations saying “they are not willing to access the right source of information.”

“The CPJ and HRW based their report on poor source of information. They don’t disclosed their sources. Sources should be public. We have to know their reliable sources. They just use convenient way of gathering information.”  He denied any of theses groups had tried to contact him despite complaints by the human rights groups that Ethiopian regime officials were not willing to respond to any of their queries.

Ethiopia ranked fourth on CPJ’s 2015 list of the 10 Most Censored Countries and is the third-worst jailer of journalists in Africa, according to CPJ’s 2015 prison census.

The regime declared a state of emergency early in October which among others prohibit publication and distribution of any material deemed critical of the government, further infringing on the rights of the remaining few critics of the government.