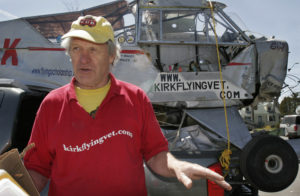 The United States Embassy in Addis Ababa said on Thursday that Ethiopian authorities have detained several foreign pilots, including Americans, who were participating in a trans-Africa air rally.

The Associated Press said Embassy officials are working with Ethiopian authorities to secure consular access to see the American pilots, the embassy said in a statement.

The Vintage Air Rally billed itself as a “flying rally across Africa, from Crete to Cape Town,” for planes built in the early 20th century.

The Daily Maily reported on Wednesday that one of the pilots now in detention by Ethiopian authorities, Briton Maurice Kirk, was missing.

AP quoted Wossenyelah Hunegnawm, the head of the Ethiopian Civil Aviation Authority, as saying that the pilots entered Ethiopian airspace illegally Tuesday and are under investigation.

“This group entered into Ethiopia without getting permission to access our airspace,” he said.

He said the pilots are in Gambella town in Western Ethiopia, where they landed their aircraft during their journey as part of the air event.

In the rally, teams from around the world are attempting to cross 10 countries in 37 stops and 35 days.