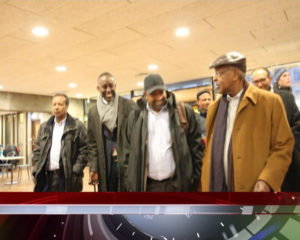 Leaders of the recently established political coalition held a public meeting in Stockholm, Sweden, on Sunday where they renewed their commitment to work for the formation of an all inclusive democratic system in Ethiopia.

The leaders of the Ethiopian National Movement, who officially launched the coalition in October at a signing ceremony in Silver Spring, Maryland, have also noted that the issues of ethnicity in Ethiopia would be resolved once and for all when there is a system in place that respects the rights of every individual.

Prof. Berhanu Nega, co-chair of the coalition and representing PG7, said on the occasion that the parties have come together as one because they believe in the formation of one and united Ethiopia, where political problems in the country could only be resolved through a democratic system.

Nega said the coalition does not claim to represent all ethnic groups in the country as they were not given the mandate by the people. But he said that any political organization could join the coalition if it accepts the sovereignty of Ethiopia and believes in the formation of a democratic system.

Leenco Laata, also co-chair of the coalition and representing ODF, said on his part that it was high time political groups come under one umbrella as individual efforts by separate entities did not bear fruit as seen in the last 25 years.

Dr. Konte Musa, representing the Afar People’s Democratic Party (ADP) noted on his behalf that the people of Afar do not put the sovereignty of Ethiopia for negotiation. He said they formed the ADP in a bid to draw attention to the plight of the people and region of Afar under the TPLF tyrannical rule.

A fundraising drive was also held on the occasion in support of the new coalition.