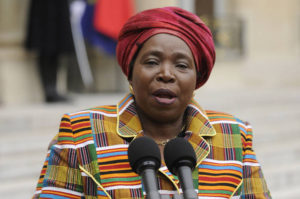 African Union Commission head Nkosazana Dlamini-Zuma has called for intense dialogue over the recent protests in Ethiopia, saying that it was imperative to find lasting solutions in the country, a nigerian news site, Today, reported

In a statement, Dlamini-Zuma said that the Ethiopian government should ensure that fundamental human rights and freedoms were respected as the guidelines on state of emergency were implemented.

She also urged the government to ensure that the internet which had been restricted due to the protests was restored.

“The AUC chairperson calls for calm and peace during the period when the state of emergency is in effect, and further urges the government to consider ensuring that citizens’ rights to access to information and communication technologies, including internet services and social media are restored,” the statement said.

The report said protesters from the majority Oromo and Amhara ethnic groups had claimed that they were being marginalised by the minority Tigrayan-led government which they accused of monopolising power and controlling the economy.